Booking at the best price guaranteed:

From an old Camargue farmhouse to a charming 3-star boutique hotel... discover the history of Oustau Camarguen!

Pierre Tesseidre was born on 3 December 1930 in Grau du Roi. His father was a doctor and he qualified as a chemical engineer and went on to work for the Salins group.

In the middle of the 1970s he fell in love with a charming equestrian centre and he went ahead and bought it.  He decided to build a hotel on the land and construction work began soon after.

The horse boxes, saddlery and storage area were converted into rooms.  The manège became the car park and the trough was transformed into a huge pot of rosemary.

In 2002 his daughter, Pascale Daweritz, took over Oustau Camarguen. A trained pharmacist then architect, she is passionate about art.

For over 15 years Pascale has continued to develop, invest and upkeep this beautiful establishment so that she can welcome guests to an authentic hotel offering an impeccable service.

Her daughter, Marie Daweritz, joined the team on 3 January 2017.  A graduate in hotel management, Marie wants is keen to become involved in this project.  The hotel is in safe hands... 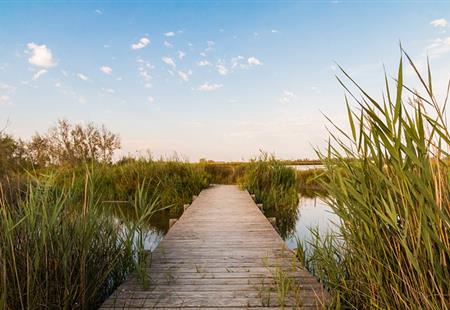